Santorini (Stroggili, Kallisti or Thira during various periods) is the southernmost of the Cyclades group of islands in the centre of the Aegean Sea. It surrounds the bay of Caldera from the east, with the smaller island of Thirassia to the west and the rock of Aspronissi towards south-west. These islands are the remnants of the original conical island which existed before the great volcanic eruption (ca. 1600 BC). The Santorini archipelago includes also the islets of Old and New Kammeni, products of later volcanic activity. 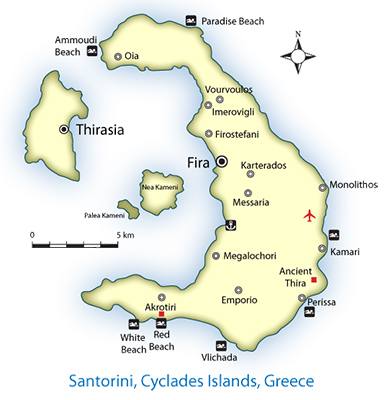 The topography and nature of the ground bears the clear marks of the eruption: Towards the crater there are steep red and black rock cliffs up to 300m high, covered with light-coloured ash (aspa) and pumice. On the outer side there are low hills and long beaches with dark sand. Vegetation is scarce due to the scarcity of water, but still there are many small vineyards -and millions of daisies in spring that later yield to the summer heat. Compared to most other islands in Cyclades, Santorini is rather densely populated, even during winter. The volcanic soil is fertile, explaining the presence of many farming villages like Messaria, Pyrgos, Mesa and Exo Gonia, Vothonas, Merovigli or Finikia. There are also settlements of maritime origin (Oia, Athinios) and others recently developed due to tourism (Kamari,Perissa). Fira is the capital of the island, with most of the public services and commercial activities.

Archaeological findings in Santorini cover the entire the Historic period. The island is considered by many to be the legendary Atlantis that suddenly vanished. Recent excavations started by Prof. Marinatos near the village of Akrotiri revealed a large settlement about 35 centuries old, well-preserved under thick volcanic ash layers, over a much older settlement as it has recently been discovered. The sound and ash of the great eruption -which seems to have destroyed the Minoan civilization of Crete- reached Egypt and even further. Traces of the Classic era exist in Ancient Thira. A long series of invaders, from Doric tribes to the Saracens left their marks on the local population, which has known many fluctuations in size. The Venetians gave the island its present name when they first anchored at the Riva beach in Thirassia, next to Santa Irini chapel. The volcano never ceased to remind its presence: Its underwater branch in Koloumbos, NE of Oia, brought death to thousands of people and animals with its poisonous gases around 1700 AD. The last eruption occurred without any victims in the 1920s, when New Kammeni was formed. However the earthquake of 1956 caused many casualties and extensive damages, which forced the Greek State to implement a rare example of new group housing blending vernacular and Modern features.

Climatic conditions are typical for the Cyclades region, with long sunshine duration and little rainfall. Humidity is relatively high (in fact, it is the main water source for vegetation). Temperature fluctuations are rather limited throughout the year and snow is a rare event. Winds usually come from the North quite strongly (especially the meltemi in August), but sometimes the south ones are nasty too

Santorini has 3 ports (Athinios, Fira, Oia) with sea connections to Piraeus, other Cyclades islands and Crete. There are direct flights to Athens, Rhodes, Mykonos and abroad (chartered) from the long runaway of Monolithos [see tips on travelling from Athens here]. Buses and taxis on the extensive asphalt road network serve local transport, while large and small boats connect several points within Caldera. Additional local transport means include animals (donkeys and mules), a cable car (in Fira), and of course a growing number of cars and motorcycles.

Santorini is well known for its strong and tasty wines which are the major local products, the most interesting being the white nikteri (from grapes picked before dawn), the sweet red vissanto ('vino santo') and the powerful tsikoudia (strong grape schnapps, identical to grappa). The local agriculture yields a limited amount of vegetables, small and tasty. A few tomato processing old factories still exist, idle but charming examples of past industrial architecture. An important sector is the mining of Theran soil (pumice), used by building industries in Greece and abroad. Shipping has always had a great historical, financial and political importance, with many local seamen and shipping tycoons. The surrounding waters are very good for fishing, but usually the demand for fresh fish exceeds the supply. The newest sector with vast and fast growth is tourism, involving a large part of the permanent and seasonal population.

The spectacular and unique landscape, the distinctive vernacular architecture and the long runaway have caused a rapid increase of mass tourism during the recent years, with all the related side effects (?collateral damage??) on the environment and the attitude of the locals. Settlements like Kamari and Perissa are quite busy in summer, continuously growing thanks to the hordes of visitors. The port of Fira is a routine stop for every East Mediterranean cruise. There are quite a few sandy shores easily accessible by car; Kamari and Perissa beaches are crowded in summer, though there are spots with better sand and fewer people at short distance. The sea in Caldera is deep (down to 400 meters at a spot west of Merovigli) and clean, but accessible only at a few points -and by few people. Nudism is rather tolerated, especially in some less crowded spots like Koloumbos. Special attractions include the excavation site in Akrotiri, the islets of New and Old Kammeni (with black lava rocks and sulphur water warm all year), and local religious events (like in Riva on the 5th of May).

The villages of Santorini still retain much of their old visual character today, in spite of greedy ?development?. The fear of pirates was a compelling motive to select sites far from the shore, on steep cliffs or hidden val­leys. Several factors have led to high density with narrow streets and small buildings: shortage of available safe space, mutual protection from the wind and the solar heat, defence, family growth, construction materials saving, as well as the highly communal spirit of the old societies. In other Aegean settlements, like Mykonos and Astypalea, densities of up to one person per square meter have been reported, so one can imagine similar crowded conditions in Santorini villages -without counting the numerous domestic animals like donkeys, pigs and chicken. In our era, when the sea is the main attraction and sunburns are more frequent than pirate assaults, more and more settlements appear near the shore where very few buildings existed even 30-40 years ago like Kamari or Ammoudi, a trend assisted by new roads.

The slope and hardness of the ground, coupled with the need for material saving, led to the creation of vaulted caves dug into the top layer of the volcanic ash for use as dwellings, stables, wineries, etc. Their front was closed by masonry walls, sometimes used as a base for the veranda of the next house up. The deep caves are usually divided in a row of 2-3 rooms with partitions imitating the front walls. Typically, the front openings are the only entries of daylight and fresh air in those deep spaces; therefore ventilation and lighting are poor, increasing condensation and enhancing the development of mold. Besides the ease of construction, a major advantage of the excavated dwellings is their thermal performance. The large heat capacity of soil reduces the diurnal and annual fluctuations of indoor temperature much more than masonry walls. Thus a satisfactory level of thermal comfort is achieved in summer and winter, with a reduced need for auxiliary heating which is required mainly to reduce humidity that causes discomfort. These cave-like structures are particularly earthquake-proof: During recent restoration works, several excavated rooms were found intact, buried behind ruined facades.